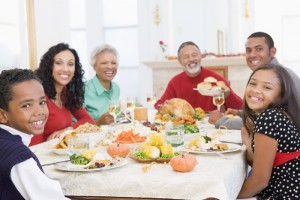 When preparing a turkey, be aware of the four main safety issues: thawing, preparing, stuffing, and cooking to the adequate temperature.

For optimal safety and uniform doneness, cook the stuffing outside the turkey in a casserole dish. However, if you place stuffing inside the turkey, do so just before cooking, and use a food thermometer. Make sure the center of the stuffing reaches a safe minimum internal temperature of 165°F.

Set the oven temperature no lower than 325°F and be sure the turkey is completely thawed. Place turkey breast-side up on a flat wire rack in a shallow roasting pan 2 to 2-1/2 inches deep. Using a food thermometer check the internal temperature at the center of the stuffing and meaty portion of the breast, thigh internal temperature should reach 165°F

When the guests around your Thanksgiving table are busy stuffing their bellies today, here’s one way to break the lull in conversation: dazzle them with some tasty turkey trivia.